It with deep regret that Ballinrobe GAA Club acknowledges the passing of Mary O’Haire (nee Canny), Mountain View, Rathkelly, Ballinrobe, who was a staunch club member and supporter for many years.

A native of Co. Galway, Mary, a nurse by profession, became actively involved in our club when she married local man Christy O’Haire, a well-known and highly regarded figure in local, regional and national GAA circles.

Together, Mary and Christy contributed to the club in numerous ways. Christy served the club as a player, manager and chairman, and also held the position of chairman of the South Mayo GAA Board. At county level, he acted as a selector on a variety of Mayo teams at all levels, including on the U21 team that won the 1983 All-Ireland final and the senior side that reached the 1989 All-Ireland football final, Mayo’s first appearance in the decider since 1951.

Mary was an ever present at club games and helped out quietly and discreetly to ensure events ran smoothly. The pair were inseparable until Christy’s sudden passing in 1996 between the drawn and replayed All-Ireland senior football finals involving Mayo and Meath – ironically, Mayo’s first final since 1989. Many’s the club and county player and mentor who appreciated Mary’s words of encouragement and commendation before or after a game. She always wanted the best for Ballinrobe and Mayo, though she retained a strong affection for her native county and enjoyed the banter whenever those great inter-county rivals were set to tackle each other. Ballinrobe was prominent in Scór, the GAA’s cultural competition, in the 1970s and 1980s, and Mary played her part as an administrator in the background. She made an indelible impression on all who met her. 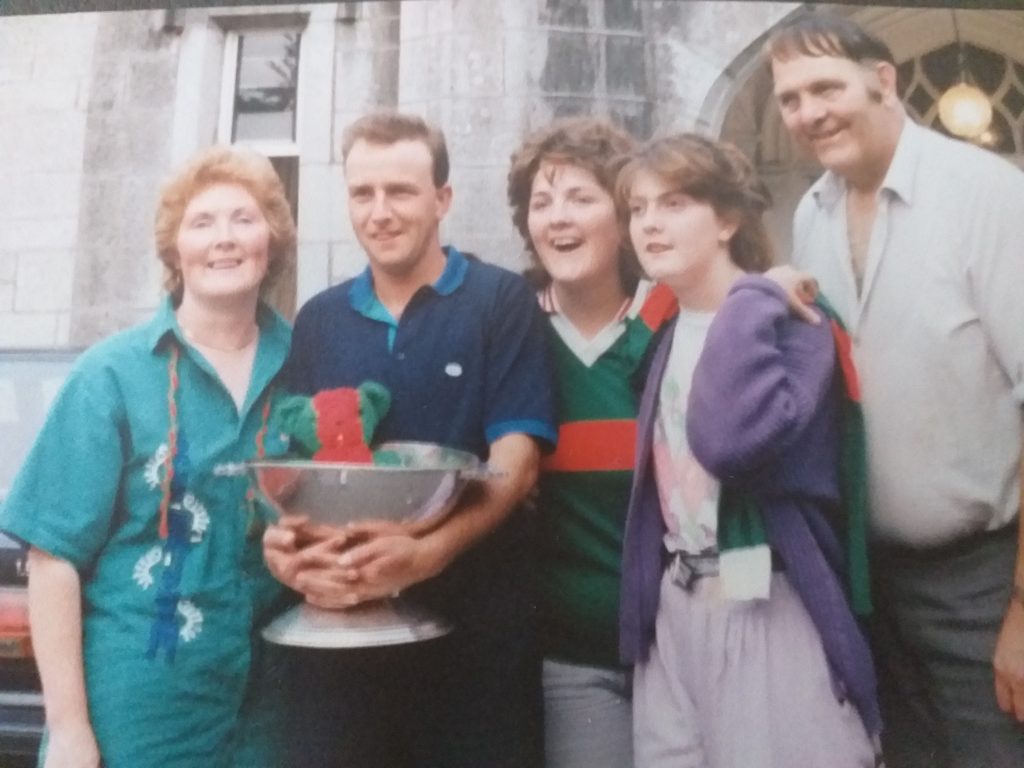 Mary O’Haire, who passed away this week, pictured with 1989 Mayo captain Jimmy Browne; her husband Christy; and their daughters Marie and Chanelle, and the Nestor Cup (Connacht SFC).

The family continues to contribute to Ballinrobe GAA Club, with Mary’s daughters Marie and Chanelle actively involved in the club, and her grand-children Jason and Mark wearing the club colours at underage level. That involvement is valued by everyone within the club, given the family tradition. Mary’s son Liam (42), who lived in Crusheen, Co. Clare, and who played with the club for many years, passed away after an illness in May, 2020. Having lost her beloved husband Christy so young, Liam’s passing was another hard cross for Mary to bear.

A minute’s silence in Mary’s memory will take place before our Mayo LGFA Junior B Ladies quarter-final meeting with Belmullet and our Mayo IFC clash with Kiltane on Sunday, September 25.